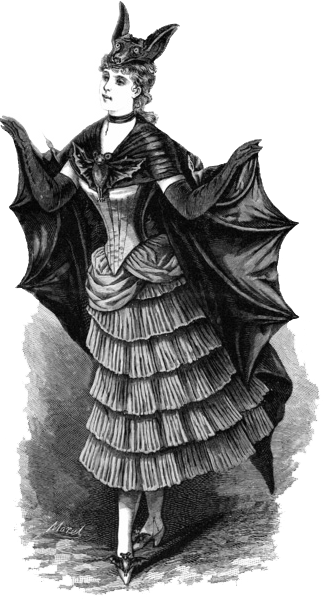 Punks had a rebellious, loud and violent way of expressing their opinions and political views. Goths on the other hand are characteristically peaceful, introspective and artistic. Goths tend to share their views of the state of the world in artistic ways such as through fashion, music, writing and visual art. In general Goth people love mythology, the mysterious, the supernatural, culture, tradition, nature, romanticism and basically hold on to things in society that they feel are important and dying out. They feel that modern society has become greedy with a throw-away mentality. What is left of the individual? Of culture and tradition? This is no kind of life – we must be the undead. Black is the colour of mourning in Western culture. And so feeling like the Undead, Goths dressed like they were the living dead. They were influenced by Victorian mourning attire and also by the Gothic tales of the undead such as Dracula and Frankenstein. And while being characteristically different to Punks – Goths were just as disturbed and angry by society as the Punks and therefore identified with them. Borrowing from Punk fashion, Goths incorporated their fishnets, safety pins and dog collars into their own style. The new Gothic fashion started off darker in colour than the Punk fashion because Goths felt as though they were in mourning for things in society that they thought were dying out. Goths are known for wearing black but Goth fashion certainly isn't limited to black. These days there are a variety of Gothic fashions that include different colour schemes. But most of the Goth fashions maintain the Undead theme whether it be the grungy torn dystopian threads of the Rivethead fashion or the creepy-cute Lolita dead doll look.

While some Goths may look scary, they are often friendly. And it may not seem like we would be, but many of us are shy. I know it seems odd that people who dress in such a different way could be shy and not seeking attention but some of us dress the way we do for ourselves and because we just like the look of the fashion sense and feel it reflects are internal thoughts and feelings.

Did Goth evolve from Punk? Goth people are just people who have a love for the dark and mysterious and therefore people like that have always existed. But modern Gothic fashion and music evolved during the Punk period.

"The particular way in which the Goth subculture dresses itself and uses make-up to give the appearance of death is a physical representation of the belief that modern society has sucked the life out of humanity. By appearing in such a way the members of the Goth subculture are making a general declaration to the rest of society and in particular to the dominant culture that they are to blame for creating these monsters, these walking dead."-Andrew Fereday

"The origins of contemporary goth style are found in the Victorian cult of mourning." -Cintra Wilson