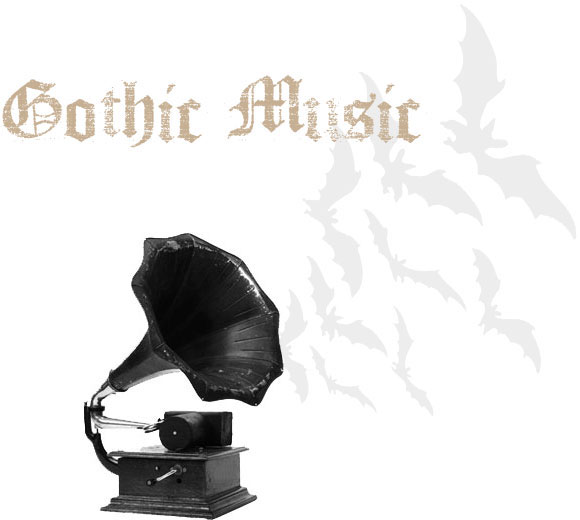 "Goth music, in all its varied forms, can be described in many ways. It is usually described, with a characteristic lack of imagination, as being morbidly obsessed with death, as being 'dark', 'sombre' or 'depressing' - descriptions which show a complete misunderstanding of the genre. Goth music, to those who are willing to listen to it rather than merely hear the physical sounds which are transmitted, is full of passion, majesty, beauty, mysticism and mystery, terror, violence, pain, love, imagination, eroticism, horror, euphoria, truth, evil, life, madness and the irrational. Goth music tends to be described, by those who misunderstand it, in terms of its dark side. It is rarely described in terms of its positive side but it should be described in terms of a balance between both dark and light, positive and negative. At its height, it can be so powerful that it transcends description."-Andrew Fereday

“Someone who is into gothic metal doesn’t necessarily have much in common with someone who is into industrial noise – their paths may not cross much. But at the same time they’re under this big umbrella of gothdom. They’re all children of the same parents.”-Liisa Ladouceur

There are many genres and sub-genres of Gothic music. All of which have a dark feel to them. Like Gothic clothing, Gothic music comes in many varieties. In fact the clothing and music sort of reflect each other. One doesn’t have to listen to only Goth music in order to be Goth. Below is a list of some of the genres of Goth music…but within these lists are sub-genres. Many Goth bands fall within multiple categories. I will attempt to classify the genres more thoroughly by listing in parenthesis what I or other people might classify certain bands as. Below are some of the genres of Goth music. Goth music comes in about every genre there is: Goth Pop, Goth Neo-Classical, Goth Folk, Goth Industrial, Goth Metal, Goth Rock etc etc. I personally like bands from every Gothic genre. 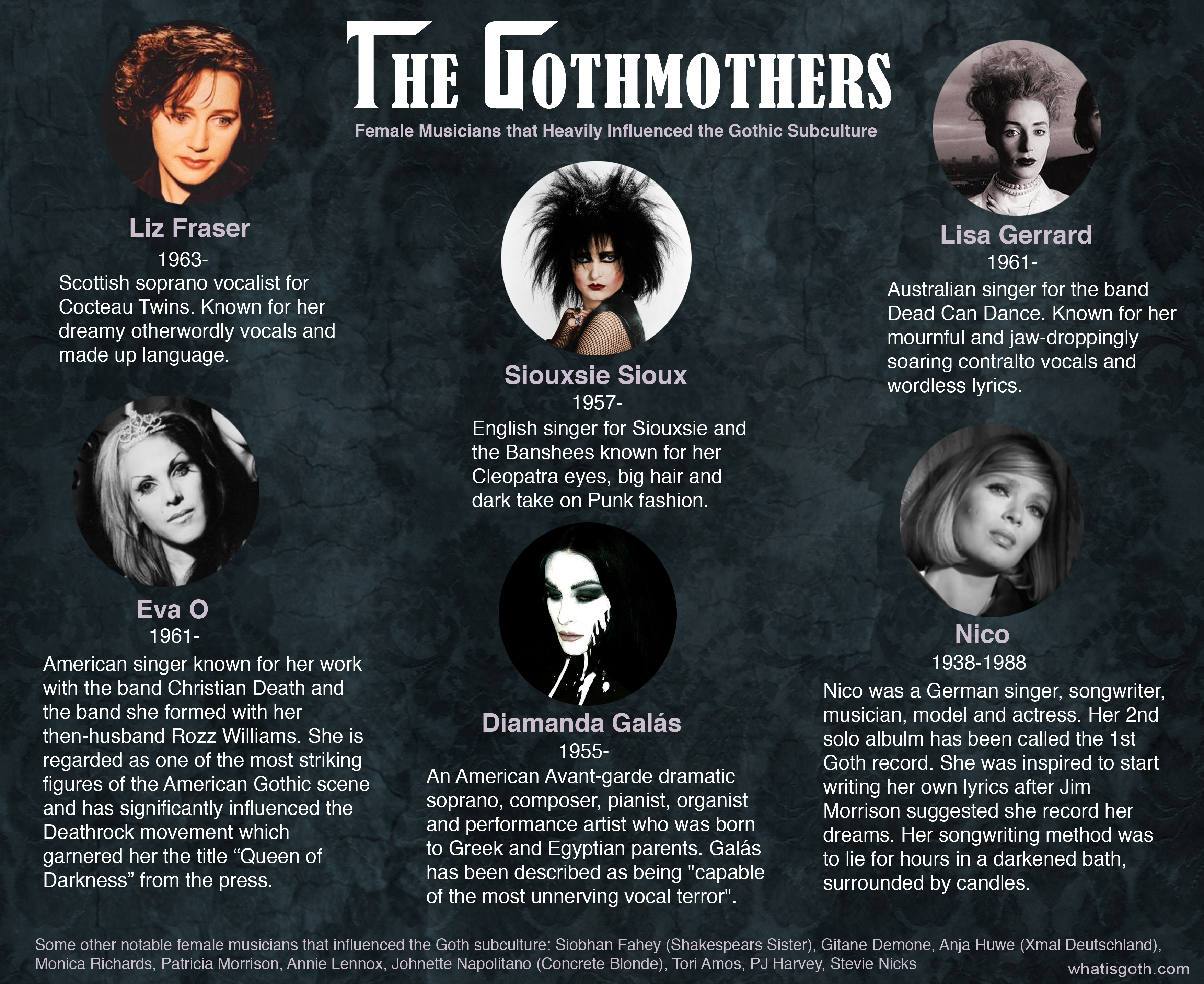 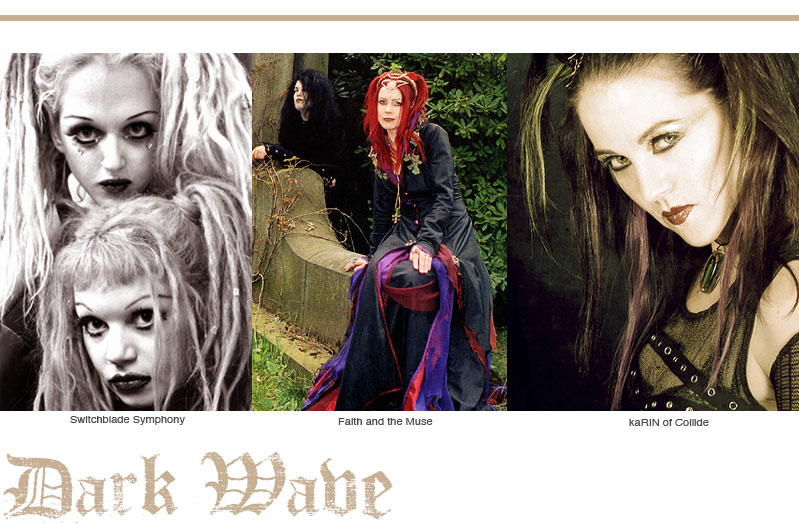 Ethereal atmosphere and angelic voices with strong influences from classical music. In the context of popular music the term 'neoclassical' is frequently used to refer to music influenced by classical (including elements from baroque, classical, romantic and impressionistic music). Has a melancholy, visionary and sometimes nostalgic quality. Neoclassical Dark Wave makes extensive use of orchestral elements.

Surreal, angelic or otherworldly atmosphere with guitar soundscapes and breathy or soprano vocals. Ethereal is strongly associated with the Projekt label, which features some of the most well known names of the US scene. Other labels that feature some of the leading lights of the movement are Tess Records.

Distortion, droning riffs and a "wall of sound" from noisy guitars with subdued vocals. The name for this music came about by bands with this sound performing while staring at their shoes. The shoegazing sound is typified by significant use of guitar effects, and indistinguishable vocal melodies that blend into the creative noise of the guitars. 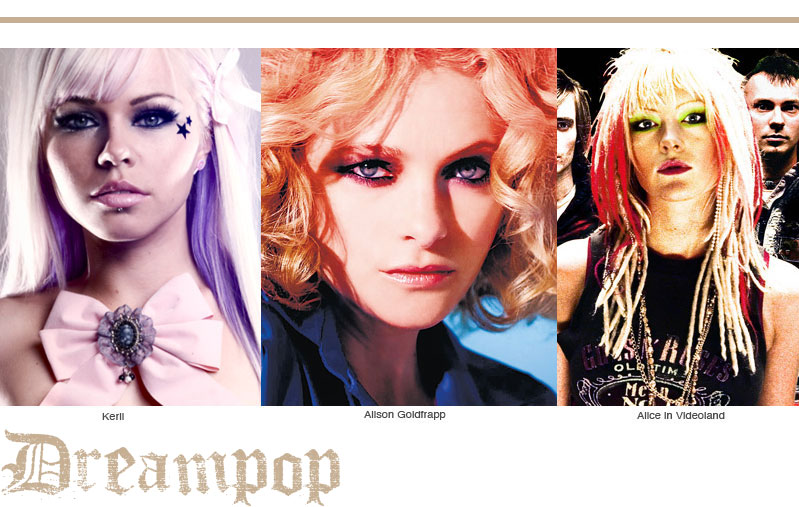 Fusions of post-punk and ethereal experiments with bittersweet pop melodies into sensual, sonically ambitious soundscapes. Ethereal textures and moods, whispered male vocals or breathy, high-register female vocals. Overall, the 4AD record label is the one most associated with dream pop, though others such as Creation, Projekt, Fontana, Bedazzled, Vernon Yard and Slumberland also released significant records in the genre. A louder, more aggressive strain of dream pop came to be known as shoegazing. 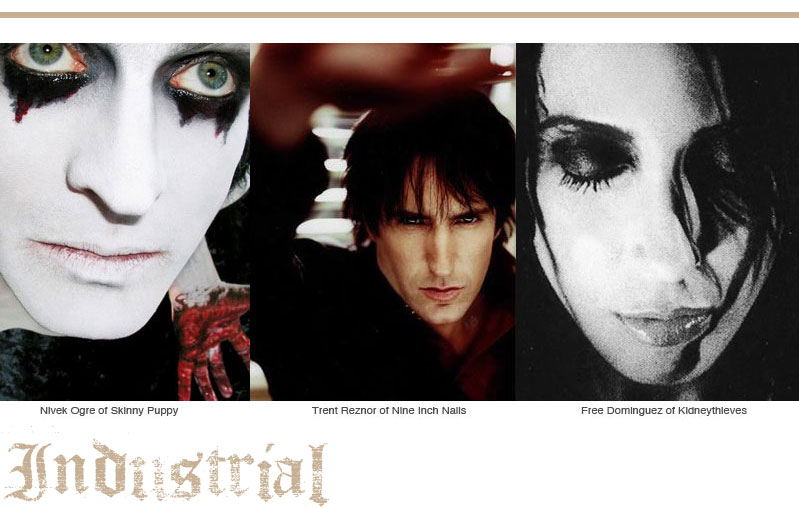 Mechanised music for androids with lyrics that makes one question the world around them. Many Industrial bands have lyrics about the evils in the world, such as animal cruelty and questionable science. It evokes images of a gritty futuristic or post-apocalyptic world where independent thought is shunned and humans are close to being androids…some may argue that this is the world we live in today. Industrial music is often combined with Performance Art. Industrial music’s muses were: Friedrich Nietzche, Surrealism and the writings of Marquis de Sade. 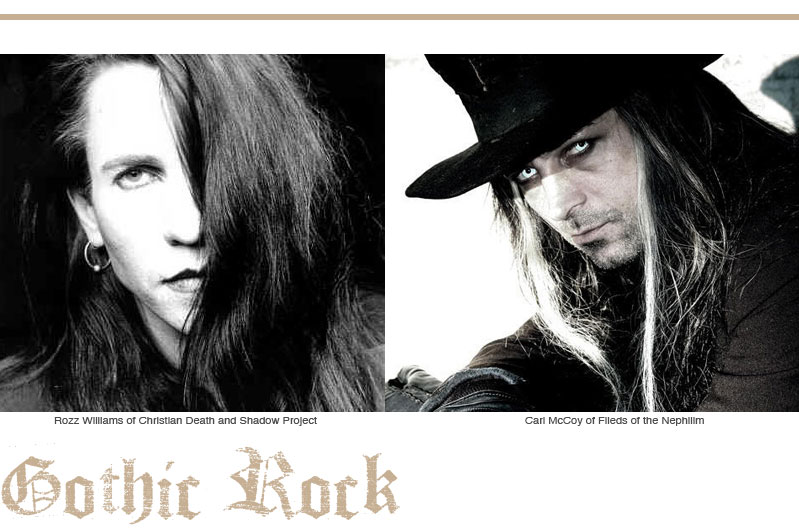 Haunting sounds, guitars, drums, theatrics, lyrics about death, religion and love. Gothic Rock was the first form of music to be labelled Goth, although dark music has always existed such as Carl Orff’s O Fortuna, the song Gloomy Sunday etc. These bands came about in the late 1960's but the term Gothic wasn't attributed to them until much later. Gothic Rock borrowed from literary movements such as Gothic horror, Romanticism, existential philosophy and the political construct of nihilism. These bands were also influenced by David Bowie and the Surrealist and Dada movements. Many fans of early gothic rock are embracing a Death rock revival, as a return to the original music and fashions of the Gothic Rock. 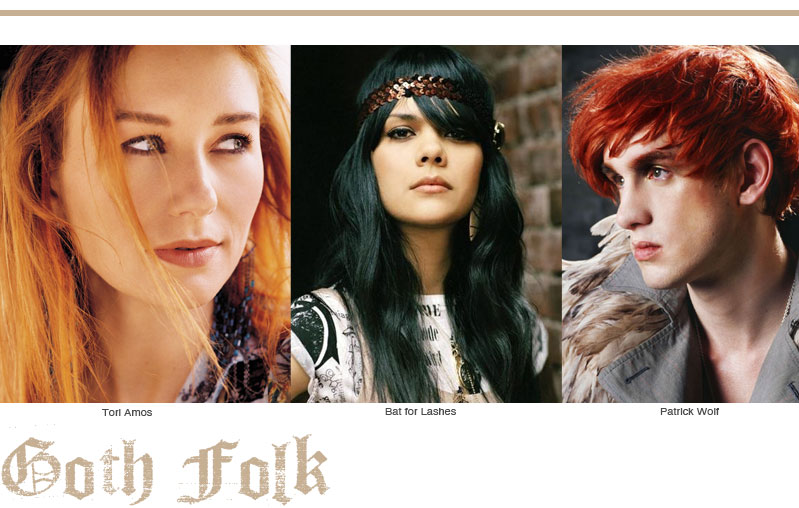 Folk music is a term for musical folklore which originated in the 19th century. Goth Folk or Neofolk is a form of folk music-inspired experimental music that emerged from post-industrial music circles. It can be solely acoustic folk music or a blend of acoustic folk instrumentation with accompanying sounds, such as pianos, strings or elements of industrial music and experimental music. A majority of artists within the neofolk genre focus on archaic, cultural and literary references. Themes such as local traditions and indigenous beliefs tend to be portrayed heavily as well as esoteric and historical topics. Neofolk musicians often have ties to other genres such as neoclassical and martial industrial. 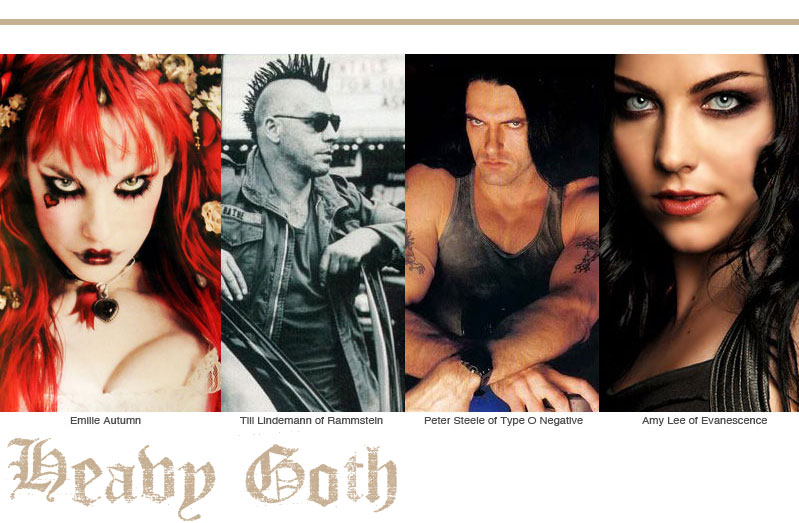 Heavy metal music is perceived by many members of the goth subculture as the "crass, crude macho antithesis of everything that their music represents". - Gavin Baddeley 2002

In contrast to the "softer" and "more feminine" character of gothic music, the heavy metal genre is typically associated with aggression, sexism and masculinity. Despite this difference, "a few bold souls have identified Black Sabbath’s eponymous 1970 debut album as the first ever 'Goth-rock' record". The author Gavin Baddeley notes that the title track of the album "describes a satanic rite, complete with driving-rain and tolling bell sound effects, while the cover focuses on a black-cloaked, spectral-looking girl in a graveyard, shot through a sickly pale ochre filter". Other commentators have described Black Sabbath as the "absolute prototype gothic heavies" and observed that by separating the band's music "from their heavy metallic connotations", one "could cull a killer Goth album from their first five LP's, with every future reference point and requirement intact".-Gothic Metal on Wikipedia

Chemically, Metal is very similar to cheese and it can very easily be become cheese. Sometimes in cheese factories in remote places in the world they accidentally get the mixture slightly off and produce an Undead Cheese. These undead cheeses then escape and produce albums. Undead cheeses are smelly and a bit runny. They are also very dangerous because they, like sirens, have the ability to suck you in and drag you down into a deep dark abyss where you become an Undead Cheese minion. Undead Cheese bands are not Goth, in fact they are not even music…they are something different altogether…something incomprehensible. Pre-pubescent to teenage males run the highest risk of being lured in by Undead Cheese. Most metal walks a very thin line between being music and undead cheese.

Q: What do I do if I suspect my son of being lured in by an Undead Cheese?

A: Sprinkly holy water on his pillow at night before he goes to bed, burn sage and pray. Do all these things without his knowledge. If he were to find out, it could only make things worse. 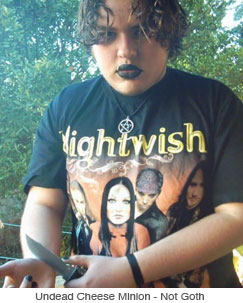 Not all of the bands below are Metal, some of them are just heavier Goth music. I will also list some Undead Cheese bands. Remember most Metal bands border on becoming Undead Cheese, it’s just the nature of the beast. 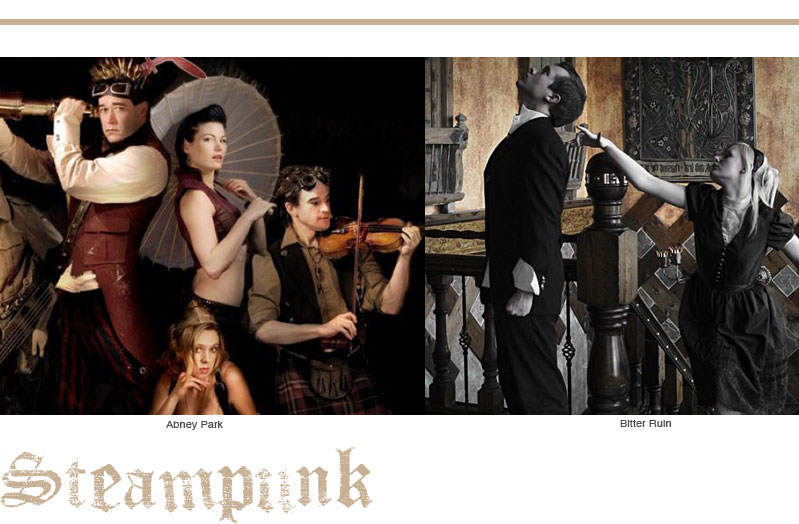 Here is nice little quote I found that I think about sums things up:

“Steampunk is far from well-established, at least as a musical form; there is no solid definition for the steampunk genre because it is such a mess. Artists who identify themselves as steampunk range anywhere from modern classical to dark cabaret to techno, the most commonly recognized is a sort of sub-par darkwave made by bored Goths who decided to change their clothes and write songs about airships. The genre is filled with talentless bandwagoners and wannabes who don’t really get the concepts of steampunk or Edwardian/Victorian themes. Not to mention that nearly everything that’s labeled 'Steampunk' could just as easily be put into another category, making it a pretty flimbsy genre. The only exception I can think of are The Clockwork Quartet, who are exactly what Steampunk should be and have produced an earth-shattering two tracks so far. And an artist doesnt have to be 'depraved' of their focus to evolve or transition into another style.” –cogsturning on www.last.fm 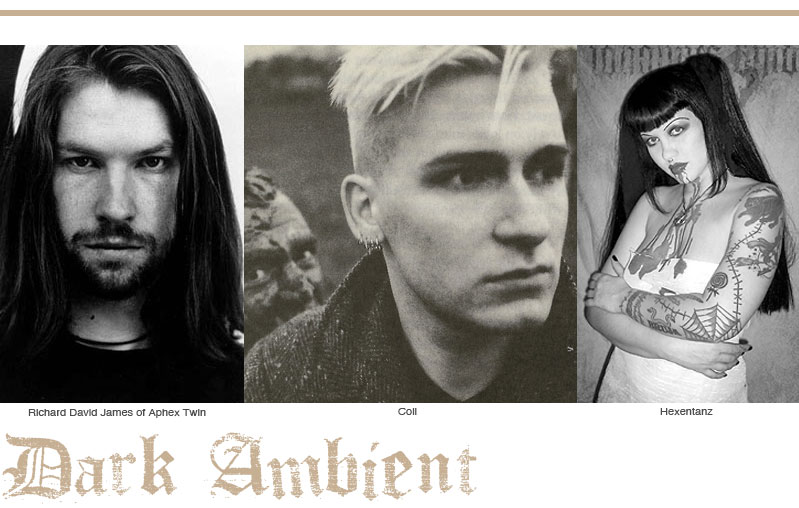 Spacial soundscapes that transport the listener to a dark, foreboding and desolate world. Dark ambient is an unusually diverse genre, related to industrial music, noise, ethereal wave, and black metal, yet generally free from derivatives and connections to other genres or styles. These artists make use of industrial principles such as noise and shock tactics, but wield these elements with more subtlety. Ambient industrial often consists of evolving dissonant harmonies of drones and resonances, low frequency rumbles and machine noises, sometimes supplemented by gongs, percussive rhythms, bullroarers, distorted voices and other found sounds, often processed to the point where the original sample cannot be recognized.

It has been said that noise music is a 'relative' or 'sister' genre to dark ambient, or vice-versa. Noise is considered unpleasant and dark, as is dark ambient. While the two genres cannot really compare sound wise, many labels, such as Ant-Zen, release both ambient and noise, as well as combinations of both, taking both avant-garde genres further.

Some Dark Ambient musicians create the scores for movies and video games. Graeme Revell created the score for The Crow and Dune and Chris Vrenna created the video game soundtracks for American McGee's Alice and Enter The Matrix. 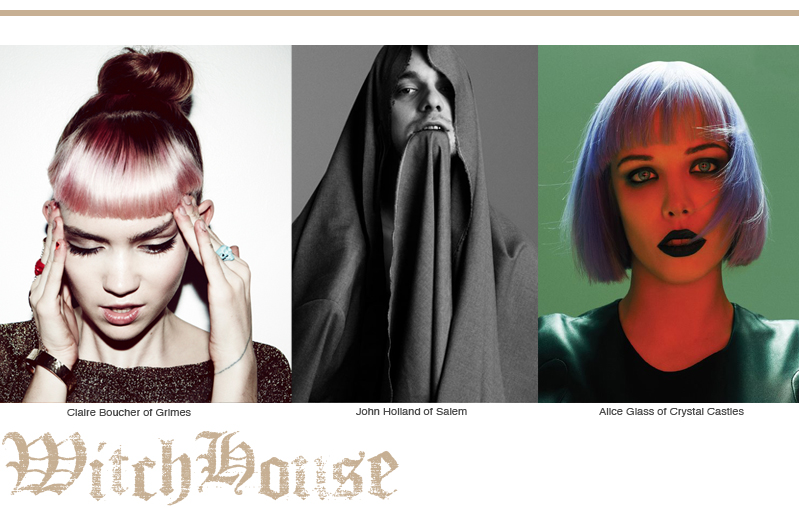 Witch house is an occult-themed dark electronic music genre and visual aesthetic that emerged in the late 2000s. The music is heavily influenced by chopped and screwed hip-hop, dark ambient soundscapes, industrial and noise experimentation, and features use of synthesizers, drum machines, obscure samples, droning repetition and heavily altered, ethereal, indiscernible vocals. The witch house visual aesthetic includes occult, witchcraft, shamanism and horror-inspired artworks, collages and photographs as well as significant use of typographic elements such as Unicode symbols. Many works by witch house visual artists incorporate themes from 60s, 70s and 80s cult and obscure horror movies, the television series Twin Peaks, and mainstream pop culture celebrities. Common typographic elements in artist and track names include triangles, crosses, and other Unicode symbols, which are seen by some as a method of keeping the scene underground and harder to search for on the Internet.

Witch house applies techniques rooted in chopped and screwed hip-hop – drastically slowed tempos with skipping, stop-timed beats– coupled with elements from genres such as noise, drone, and shoegaze. Witch house is also influenced by hazy 1980s goth bands, including Cocteau Twins, The Cure, Christian Death and Dead Can Dance, as well as being heavily influenced by certain industrial and experimental bands such as Psychic TV and Coil. The use of hip-hop drum machines, noise atmospherics, creepy samples, dark synthpop-influenced lead melodies, dense reverb, and heavily altered or distorted vocals are the primary attributes that characterize the genre's sound. Goths love tradition and holidays. Fortunately for us there is a plethora of traditional Christmas/Holiday music to choose from sung by our favourite Goth bands, most of which is available from Projekt Records. I look forward to listening to my Gothic Christmas music collection every year. It provides a magical setting for my Christmas celebrations. I can't imagine anyone actually liking the modern holiday music that is produced today. So if you are like me and don't want to hear sickeningly bubbly modern rubbish, have a listen to the playlist below for traditional holiday music that has dignity and meaning.

Links to videos about what Gothic music is: